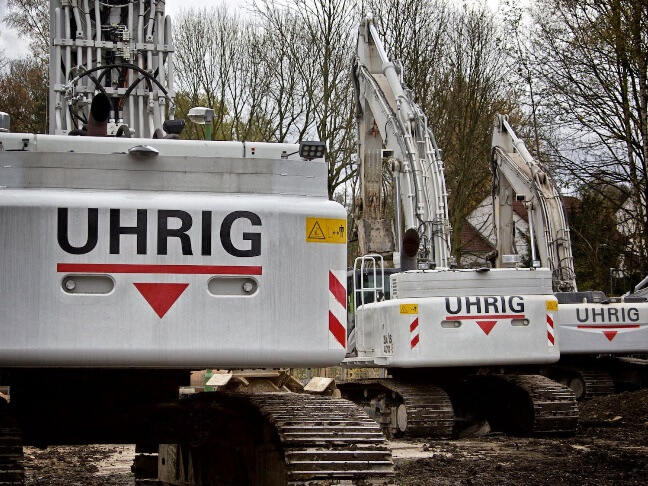 Fit for the future with over 55 years of experience

The UHRIG Group proudly looks back on over 55 years of company history. Since it was founded in 1963, a lot of water has flowed down the sewer, and UHRIG has always been involved. In addition to civil engineering, sewer network management, sewer rehabilitation and compactor construction, the family company primarily relies on future-oriented energy from wastewater. We would be happy to inform you!

Are you interested in making an idea a reality with us?

This is where we come from

In 1963 Anna and Helmut Uhrig founded Helmut UHRIG Straßen- und Tiefbau GmbH. That was the start. Today the company is still run as a family business in the third generation. In the meantime, UHRIG has grown – in terms of business areas and experience. The recipe for success is flexibility and future-oriented thinking. We build sewers, we manage them and rehabilitate them. Now we are also generating environmentally friendly heating energy from them. Creative ideas and the development of innovative technologies accompany us along this path.

“My father took a very courageous step back then, he gave up his secure employment as a civil servant for life and dared to go into self-employment.”

That is where we want to go

Without wanting to neglect our other business areas, we decided to found UHRIG Energie GmbH in 2019 due to the increasing demand for energy from wastewater. In terms of the energy and heating transition, we are focusing on the development and expansion of climate-friendly waste water heat recovery and striving to adapt the political and legal framework conditions analogous to geothermal energy. We see enormous potential in this technology and with our Therm-Liner systems, which have already been installed in almost a hundred projects, we hold the undisputed top position on the European market. We will continue along this path!

The most important milestones in our history

The founding of UHRIG Energie GmbH
Reason: Increasing demand and strong growth in the heat from wastewater business area

Construction of the largest plant to date for generating energy from wastewater
A system with an extraction capacity of 2,100 kW was installed in Stuttgart.

Christoph von Bothmer took over the management of Helmut UHRIG Straßen- und Tiefbau GmbH
The company was handed over to the 3rd generation.

UHRIG brought the “Proline” series of excavator attachments onto the market
The attachment compactors are sold both new and used.

Helmut Uhrig, the founder of our company, died.

Market launch of the Liner end cuff under the Quick-Lock brand
System for connecting pipe liners to pipes and structures.

Office in Krefeld was opened, with a focus on: Plant construction and network management
UHRIG offered hardware and software for the optimum operation of sewer networks.

Launch of the patented Therm-Liner systems
UHRIG brought energy generation from wastewater to the market.

First use and patenting of the UHRIG pipe laying robot
With this system, pipes can be laid unmanned.

First use and patenting of the UHRIG tubular zone compactor

Large construction site at Lake Constance
Testing of the “UHRIG system” during the construction of the drainage system for the new trade fair in Friedrichshafen.

UHRIG received the Rudolf Eberle Prize, the innovation prize of the state of Baden-Württemberg
The Quick-Lock system is awarded.

First use and patenting of the UHRIG soil treatment system
Designed and used for inner-city sewer construction sites.

First use of excavator-operated attachment compactors for sewer construction

Anna and Helmut Uhrig found Helmut UHRIG Straßen- und Tiefbau GmbH
The first project: Sewer in Geisingen, where the company is based.

Sustainable and careful action is not just a cliche for us. We make bodies of water clean again and ensure that our groundwater always remains clean.

With over 55 years of experience in civil engineering and sewer construction, we know what is important in our complete solutions which are well thought out from start to finish, so that we can hand over a project that is ready for operation.

There is always an adjustment, that would enable us to do even better with our products. We therefore constantly work on innovations and improvements.

Are you interested in making an idea a reality with us?

In order to guarantee all expected functions and to offer you an unrestricted web experience, we work with so-called cookies.